This paper is intended as an introduction to vOLT (virtualized Optical Line Terminator) white box appliances and the network concepts they are intended for. Optical Line Terminators are used within GPON point to multipoint residential services defined under FTTx services.  vOLT takes this to the next step by creating an OLT that can plug into and operate in an SDN/NFV cloud type environment.

Why implement vOLT as compared to a legacy OLT solution? The answer lies in the general re-thought of data centers which previously and currently are made up of multiple disparate equipment vendors and equipment types (usually cumbersome card-populated chassis PON systems). This complicates staff training and duties, and balloons capital expenditures whenever new capacity or features are added. Further cluttering matters, is the hefty configuration of the network done on a per appliance basis, obscuring network clarity and adding to operational costs. Legacy networks are also extremely rigid and lethargic (inelastic) in regards to upgrades, expansion, and service additions which can take weeks, months, or even years to complete. Implementing a disaggregated GPON network means an optical operator can implement expansions in literally minutes and possibly even seconds.

As noted earlier, vOLTs are white box appliances and as such they need a software framework to reside in to forward traffic on the data plane according to the subscriber traffic requirements and the operators specifications.  A recent prominent innovation for this has been defined as R-CORD or Residential Central Office “Re-architected” Datacenter. The conspicuous word is “re-architected”. This means a complete shift from the diverse, proprietary, inflexible and purpose-built architectures (large truck delivered multi-chassis) of the past to a mixture of commodity servers and white box appliances interconnected through a leaf and spine arranged switching matrix. Onboard those devices, one can find the combined technologies of SDN and NFV (Network Functions Virtualization) that provides a flexible unified office. R-CORD is one definition of this idea and a working open software framework that is currently under trials by multiple operators. vOLT falls under R-CORD as the white box appliance defined to terminate Optical Distribution links and thus aggregate the subscriber connections. Further, CORD replaces the management function typically scattered throughout a central office’s multiple chassis management cards into generic servers. The server’s functions are divided into ONOS platforms and XOS platforms. ONOS or Open Network Operating System provides the open platform for SDN that can provide an operator with high-availability, modularity, and abstraction layers required for the vOLT appliances resulting in greatly reduced OPEX costs.

To provide flexible subscriber services, another open platform XOS is also specified; which in short is an “Everything As A Service” or X-Operating System. XOS is an orchestrator of the NFV services that are both subscriber essential and added value. Operators can flexibly use XOS platforms to provide the NFV components of their R-CORD office. 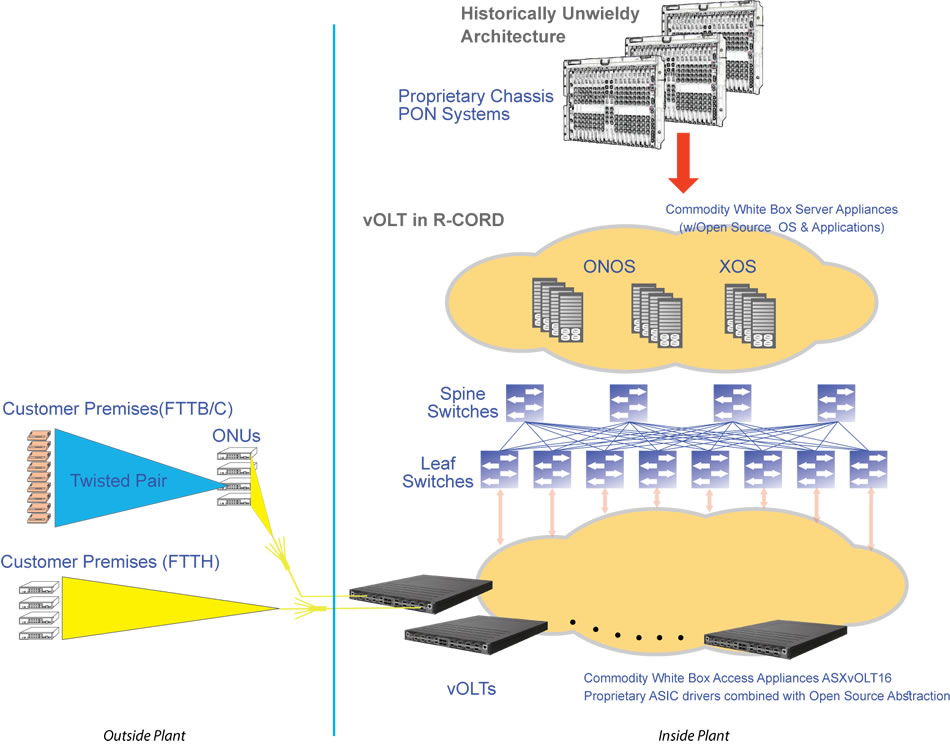 Using XOS NFV servers gives an operator a method to instantly provision their remote optical subscriber’s essential services and optional enhanced services from commodity servers within the R-CORD cloud. In this way, XOS allows an operator to expand capacity and add new services quickly and cheaply, easily keeping up with demand and technology changes.

An important project in association with the CORD development and under the Open Network Foundation is VOLTHA.   This is the Hardware Abstraction (HA) element framework which gives control and provision access to vOLTs through its management interfaces. VOLTHA manages this access by virtualizing the PON hardware in the vOLT from ONOS and XOS. Open system developers from operators and vendors alike, can use VOLTHA to access the vOLT as a virtualized network device from their own SDM system, as defined under CORD and ONF. A vOLT is essentially a PON type device, and so is made up of a vendors PON components i.e. the ASICs and Ports that interface with the optical lines from ONUs and splitters. VOLTHA provides the segregation of the underlying hardware from the control system for the PON network. On the south side of the VOLTHA interface, it communicates with the Vendor protocols.  This is the case with the first vOLT whitebox appliance the ASXvOLT16, (from Edgecore) which uses MAC and switching chips from Broadcom. On the ASXvOLT16, the north side of the VOLTHA layer provides control access to its Broadcom silicon by presenting a hardware abstraction in the form of APIs that the SDN and NFV controller layers can mesh with.

Up to this point only GPON has been discussed, however the general solution for vOLTs has been defined to support a 10 Gb/s PON service. This is in-line with keeping up with bandwidth demand as network speed continues to soar ever higher.  The base design for the vOLT defines an underlying Open Network Linux (ONL) platform.  A passive optical network (PON) system that operates at a nominal line rate of 10 Gb/s downstream and upstream supporting either XGS-PON or NG-PON protocol suites as defined by ITU.  Because of this, the design of vOLT equips it with XFP (10G SFP transceiver capable) ports that provide the aggregation for PON terminal units. Upstream egress ports that support QSFP28 transceivers capable of either 40 or 100 Gb/s are also specified. 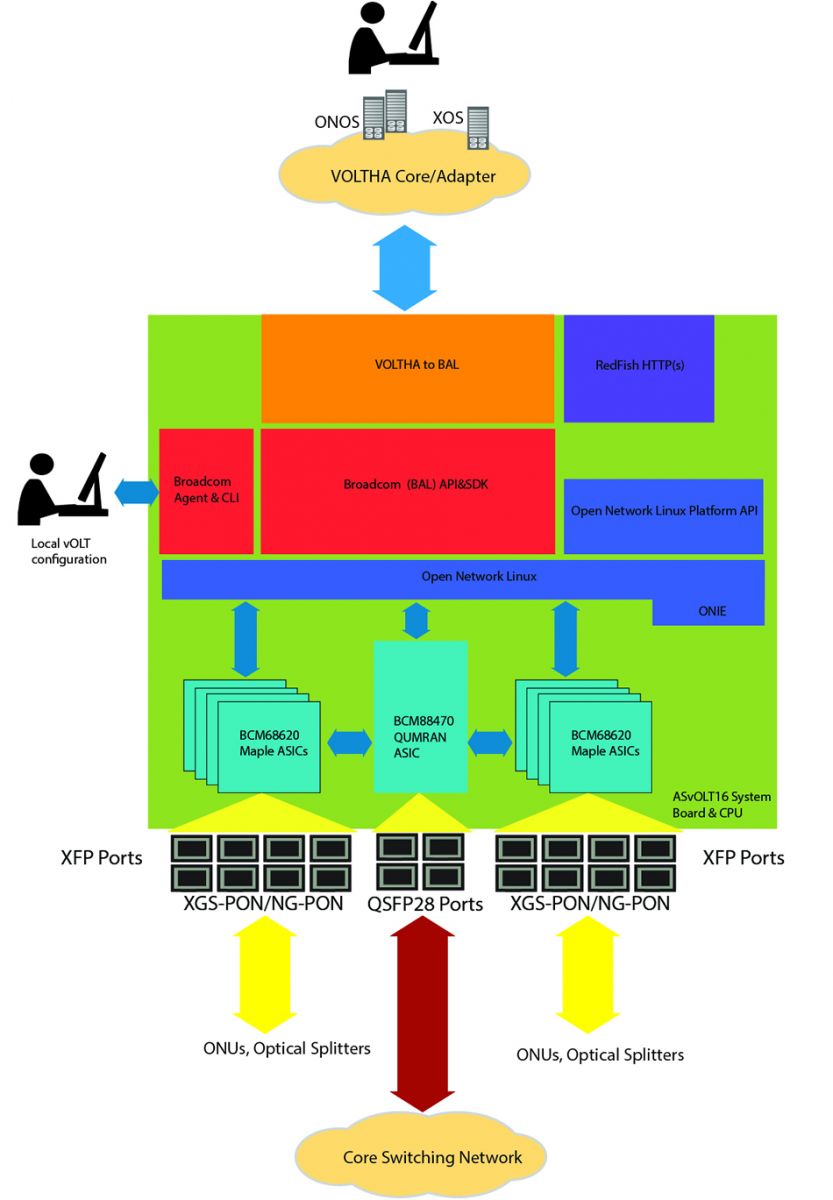 As mentioned already, an available XGS-PON vOLT being trialed successfully is the Edgecore ASXvOLT16. Its data plane flows are realized using Broadcom’s StrataDNX™ switching silicon and multiple Broadcom proprietary ASICs that includes ingress MAC chips (Maple) and an egress MAC chip (QUMRAN). These chips are managed through the Broadcom drivers using the vendor’s BAL API (Broadcom Application Layer). Ultimately, the configuration and control of subscriber traffic data flows comes from an ONOS SDN controller by means of the VOLTHA layer which abstracts the underlying BAL API.

For integration, testing and troubleshooting, the proprietary BAL layer provides a local CLI interface to the vOLT. Subscriber services are instantiated for each PON subscriber using commodity servers running XOS within the R-CORD structure. Subscribers can use bare-metal CPE devices, so their essential functions such as DHCP and NAT can be managed from an instantiation within a virtual container. These virtual containers exist on Central Office servers defined as a vSG or virtual Subscriber Gateway.  Control and subscriber services are offloaded from the vOLTs, resulting in a commodity type server device that can be added or subtracted from the network with little effort.

Below is a summary table of some of the key takeaways or benefits which can be realized by using vOLT within the R-CORD and VOLTHA frameworks:

Recent news indicates AT&Ts (a leading force behind vOLT) vOLT trials using R-CORD and VOLTHA have been successfully completed. Costs at this early stage have already been shown to be on an equal basis with legacy GPON systems and can only decline. The first VOLTHA standard is officially released by AT&T and ONF’s ONOS, XOS, and ONP software is readily accessible for any operator. “Cloudification” of operator’s data office architecture is fully underway despite the huge initial complexity of the paradigm shift. Edgecore’s ASXvOLT16 has been a highly fruitful inaugural vOLT. It could be the network-proven white box vOLT appliance that will be the archetype for all future developments.