Overview
Innova is an IT company that creates web services, publishes computer and mobile games, and develops 4game - a gaming platform and news portal with more than 25 million active users. 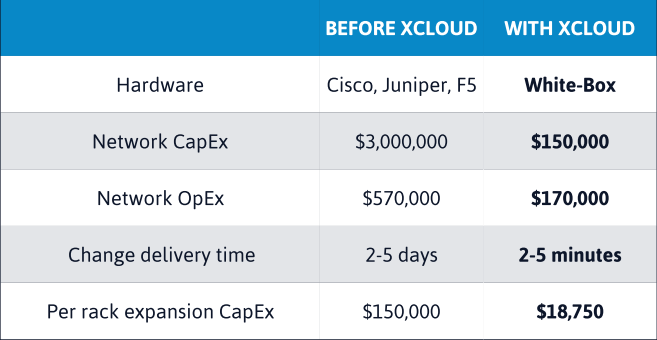 Challenges for Innova
Solution provided by XCloud Networks
As XCloud Networks provides an out-of-the-box automated solution to run complete data-center networks based purely on open networking technologies, it became an all-in-one solution for the challenges Innova had to face. As a result, Innova swapped Cisco, Juniper and F5 for XCloud Networks.

In the scope of the partnership Innova:
Benefits:

Scalability: Swapping the existing 20 racks of operational infrastructure within 4 months and rolling out new sites in just a few days was important to Innova.

Diversity: XCloud Networks supports more than 40 hardware platforms available from 10 brands, and supports native integration with 6 open source software platforms. This enabled Innova not to be tied to one vendor provider while choosing a hardware.

Technical Assistance: Innova had easy access to senior level 24/7 technical assistance and professional guidance during the planning and migration phases.

Watch the video - "How to adopt a software-defined mindset in your network" conducted by XCloud Networks and Cumulus Networks. XCloud Networks CEO, Alex Saroyan gives a better insight into the demand of Innova and the business drivers that forced them to reassess their network build.

Why Cumulus Networks?
Cumulus Networks, the leader in building web-scale networks for the digital age with open and modern software solutions, provides organizations with all the tools needed to affordably build and efficiently operate networks like the world’s largest data centers. Cumulus was selected because of its wide selection of hardware compatibility, native support of FRR and BGP unnumbered, and strong collaboration between XClound Networks – all of which were very important parameters to Innova.

About XCloud Networks
XCloud Networks provides an out-of-the-box automated solution to run complete data-center networks based purely on open networking technologies. It fully automates the deployment and management of network infrastructure providing all the required applications in easy to manage and ready to use fashion (Security, VPN, load balancer, BGP peering, L2/L3 circuits, routing on the host, cross-connects, monitoring, logging, analytics, in system software upgrade and else).

It enables companies to scale 10X with existing human resources and save 20X on total cost. Moreover, only a five-hour training is required for engineers to run XCloud Networks' solution. With XCloud Networks it takes maximum 3 months for companies to facilitate their smooth transition into open networking.