Located in Düdingen, Fribourg, Switzerland, senseLAN GmbH provides internet, TV and telephone service to around 12,000 private households and 500 business customers in the Fribourg region. In addition to these services, the company provides hosting and server housing from its own two data centers. senseLAN designed and built the data centers itself, which has given the team the freedom to select the infrastructure that best meets its needs.

PILOT PROJECT: OPEN NETWORKING
Like many comparable providers, senseLAN traditionally uses the same networking platform from a large, well-known network company. "However, we are generally very open source-savvy", says Martin Kolly, Systems Engineer at senseLAN, "and many of our servers run on Linux. We barely use Windows at all." The team therefore possesses strong Linux expertise, including when it comes to network functions.

After completing the initial testing with the free Quagga Software Routing Suite, in April, 2016 Martin Kolly's team decided to launch a pilot project with the open Linux-based network operating system from Cumulus Networks. The team opted for the virtualization platform, which is used to operate the mail infrastructure with its roughly 15,000 accounts as well as other internal network services, such as DHCP and virtual customer servers. "Our virtualization platform is based on CloudStack and supports virtual routers, so we were very open to the possibility of using Linux-based routing here."

The project was implemented in the summer of 2016. In the fall, the virtualized network infrastructure began running Cumulus Linux and two AS5712-54X open networking switches from Edgecore – still officially as a pilot. However, Martin Kolly notes: "We have had consistently good experience, and the new environment has already been deployed."

POSITIVE   EXPERIENCE
For senseLAN, the main advantage of the open networking platform is that the Cumulus operating system is Linux-based: "If you are already familiar with Linux, you immediately feel at home on the new platform. It is very easy to integrate into the existing Linux environment and can be managed using the same administration and automation tools, such as Ansible." The configuration and monitoring are said to be very simple – one of the main reasons why Cumulus was selected.

Cost savings were also said to be a factor in the decision. Getting started does, however, require familiarization with the details of the Cumulus scripting syntax. The staff of course had many years of experience with the conventional network infrastructure used outside the virtualization platform, and there are certainly differences. "But once the settings have been configured properly, the Cumulus based network is very reliable."

The documentation available on the Cumulus website is also outstanding, notes Kolly. "Specific examples show the conven tional configuration and compare this with how you do it with Cumulus." Kolly also praised the solid partnership with Boll Engineering. "We were already well-acquainted with the company and for this project, too, they offered us good advice on which products would suit us best and make the most sense." The senseLAN team then completed the actual installation and configuration on its own. 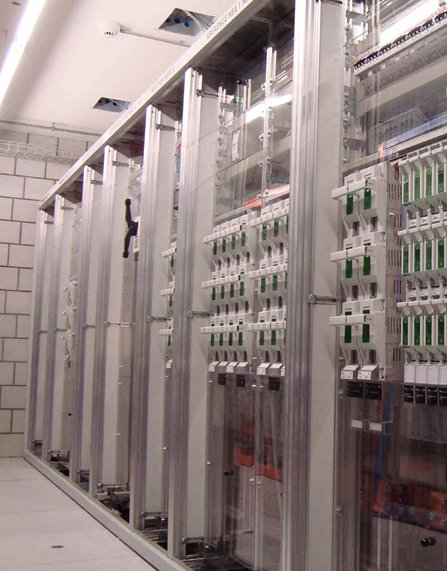 Models used in the case 2 units AS5712-54X 10GbE data center switch with 48 10G SFP+ ports, and 6 x 40G QSFP+ uplink ports, serving as leaf switches with uplinks to spine switches and downlinks to controllers and compute nodes.   For more details on the SenseLAN project, please refer to the PDF file.